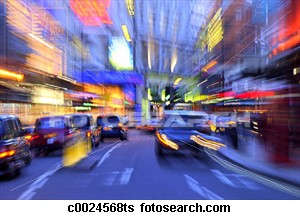 The breakthrough has come at last.  My husband has elected to pitch himself head first into the linguistic cat fight that is adult second language acquisition.   Not his.  Mine.  He has conceded to practicing Romanian vocab with me (it only took 2 1/2 years…)

It happened in the car,  on our way to a film event in Victoria last night, Cezar suddenly (accidentally??) fell into a short conversation of practice words and ended up in a night-long marathon of vocabulary-building that left him thanking the stars he had given up his career as a teacher decades ago!

I was like a hungry child on Christmas morning – wolfing down nouns and adjectives faster than he could supply them!  I suspect that this little diversion was more diverting for myself than for him, but I know that – provided practice – I’ll be able to advance my skills and yield a more challenging conversational contribution than:  albastru, galben, shi rosu! 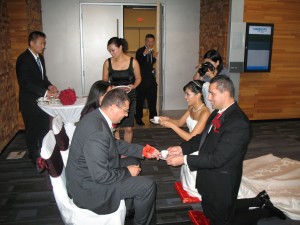 Dinner at The Italian Kitchen downtown.  To answer our server’s query of “Parmesan, anyone?”, Sebi replied, “Pasta without the cheese is like sex without the kiss.”  Lucky server – he’ll be using that line again.

Cameo by The Bride – moving fast, in sportswear, stopping by to pick up last-minute items before retreating back to her hotel seclusion (with bridesmaids and other ‘event committee’ personnel).

More talking – late into the night, and doubly-impressive considering the 20-hour journey from Bucharest to Vancouver (they had a little stopover at Harrod’s).

Part II:  For Richer or Richer

After two years together, my husband’s habit of arriving to any given social event at least 30 minutes later than promised should not come as a surprise.  We call it ‘Romanian time’, but I think he takes even more license than his countrymen.

On this occassion, I elected to go ahead of him.  My taxi pulled up to the Vancouver Convention Centre (a wedge of glass, cedar, and metal that shoulders its way into Burrard Inlet from the downtown core) just minutes before the bride was due to walk with her father to the waiting groom.

I tiptoed around the immaculate white satin runner that had been laid down for her approach and found a seat at the back of the intimate ceremonial balcony, taking my place among friends and family that had been gazing out over the North Shore view for 40 minutes or more.

When the lady of the hour appeared, all of us were silent (especially Cezar, who had not yet arrived!).  The light rain only brightened the white of her gown and made the apple-sized rose petals scattered at her feet even more vibrant – such a passionate red against those west coast greys and blues.

I doubt that the overseas guests caught all the jokes in this lighthearted nuptual, but the beauty of the moment and the affection between Mihai and Rida needed no words at all.

After dinner was enjoyed, speeches survived – and the bride stolen, bargained for, and regained by her husband – the restless Romanians (a minority 8 out of 80 or so guests) finally got their chance to dance!

The dj had no breather from the first song at 9pm until the final close four hours later, and many at our table (myself an ‘honourary Romanian’ among them) moved their feet to every single track.

The 80s were heavily favoured (a blessing), but my playlist highlights have to include three old school Romanian folk songs:  Drumurile Noastre Toate, Ionel, Ionelule, and Hora Moldoveneasca.   *stay tuned for mp3 files! 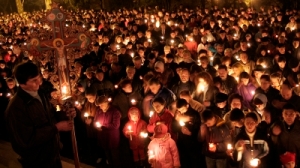 Three years ago, when I met my husband, I first imagined what life within the borders of Romania (a yet unknown and unimagined entity) might be.

He described to me the traditions of  Easter in the Orthodox church.  In particular, the custom of going to midnight service on Easter Saturday (April 3rd this year) and taking from the church a lit candle … a candle that you would hold in your hands as you circled the church several times, then carry home to bless your house with the light of God.

I loved this idea – hundreds of candles floating through the night like a river.  Everyone together for one moment, then fanning out in all directions to their warm homes – ready to feast on delicious cakes and succulent lamb!

One cake, in particular, deserves special mention.  It is called pasca and it is truly a thing of glory.  Below is the recipe, according to my ‘Bucharest bakerman’:

This may seem labour-intensive.  But it’s worth it.  We’ve been savouring Cezar’s Pasca de Paste all week and I am grateful to his mother, grandmother, and to all of Romania for gifting us with this delightful treat!

A few of my favourite words …

There is something about the sound, shape, and rhythm of certain words.  They are fun to pronounce, they roll off the tongue, and their beauty goes beyond literal translations and everyday meanings.

Just a few, from these first days of Romanian study:

unealta – tool.  an elegant word for such a humble object.  I wonder (Romanian friends??) if this refers only to workman’s tools, or could also mean something more creative/fantastical (like a magic wand or a flying carpet!?)

creioane – pencils.  excessive use of vowels, often all in a row!, is frequently found in Romanian vocabulary gems like this one.

dumneavoastra – you (polite).  again, with the vowels!  and it’s such a lovely tongue-twister.

vanzator – shop clerk.  because the meaning is so unexpected!  to me, this word sounds formidable and proud.  it reminds me of “vanquish” and brings to mind superheroes and knights in silver costume.  go, shop clerk, go!

March 1st is the holiday of martisor in Romania (pronounced “martsee-SHORE”) and it heralds the beginning of spring.  The name means little March or dear March, and is often connected with the Roman god of war.  Some believe that the red and white colours of the martisor pendant represent war and peace.

There are many interesting stories (and theories) about the origins of martisor.  I will include just one … my favourite!  It is a pre-Christian and pre-Roman story, stemming from Romania’s ancient Dacian culture.

The story goes that the Sun was looking down on mankind as they celebrated and wished to join in their oh-so human delights.  He took the form of a young man and joined the party, but was rudely interrupted by a nasty ogre – who kidnapped him and locked him up in a dark cave.  Poor sun!  The world was plunged into darkness.  The people were no longer in the mood to celebrate.

Fortunately, a bold and brave hero hastened to his rescue, defeated the ogre after a fierce battle, and used the last of his energy to release the Sun from his shadowy prison.  As the Sun emerged, the world became bright and warm again.  The earth began to shiver with new life.

Our brave hero fell to the ground and blood from his wounds soaked the late winter snow.  Where the blood fell, a white snowdrop (ghiocel) grew.  Hence the trademark red – for life’s vitality – and white – for purity.

Today, Romanian women wear the red and white twisted string – often with a silver or gold coin (old school) or jewel representing a flower or animal (latest fashion).  This is most often made into a brooch, and can be worn for up to two weeks into March.  Countryside post-pagans also hang ‘martisor’ pendants from windows, trees, and the horns of farm animals to chase away evil and to imbue their homes with strength and beauty.

He may not be a saint, but we pray for his blessings each and every day

Today is my son’s first birthday.  He is too young to be worldly, but definitely too mischievous to be saintly!  In his honour, I am forcing myself to learn the “Happy Birthday” song in Romanian.  Here goes:

Basically it means, “live long and prosper”.  I like to think of it that way.

Finally, is it just me, or is this LEGO birthday cake a wonderful inspiration?!  I wish someone had thought of that when I turned one.

Where WOULD we be without the fountain pen?

No, this is not a fountain pen seen from below.  It is Constantin Brancusi’s ‘Endless Column’.  I include him here because I think his name may be familiar to non-Romanians.  Another well-known countryman of his was Mircea Eliade – religious historian, mythologist, and fiction writer.

A few inventors and inventions from the land of Vlad:

Now, these 6 examples barely touch the surface of Romania’s famously inventive intellect.  I challenge readers to supply more … we know they’re out there (the inventors, I mean, not the readers:) and we want to hear about them!